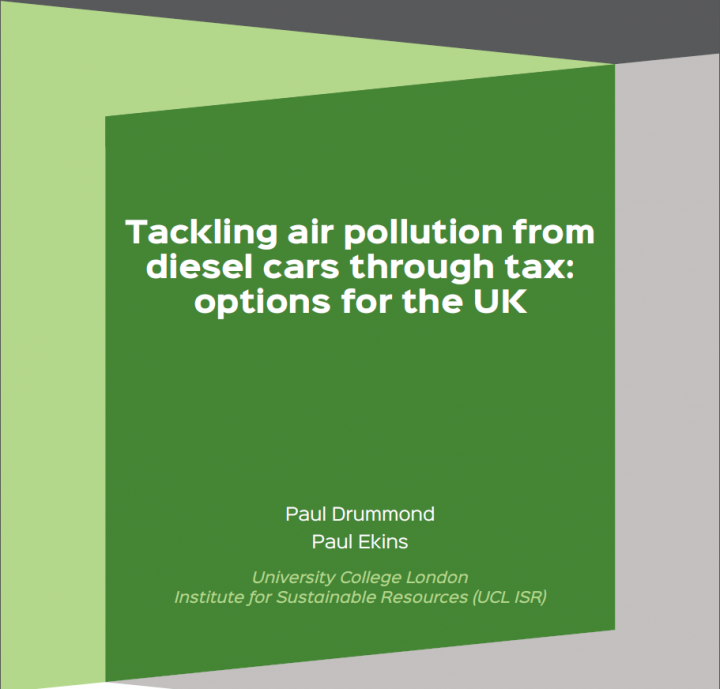 “Fumes from diesel cars kill people, however indirectly – even from newly-manufactured models”, said James Nix, Director of Green Budget Europe, the non-profit organisation which has commissioned a new report titled: Tackling air pollution from diesel cars through tax: options for the UK.

“The governing EU regulation was weak before the 23 June referendum and, after the vote, its future application is uncertain. Taxing diesel cars according to their NOx emissions is an increasingly feasible way to cut air pollution”, Nix said.The author of the report is Paul Drummond, Research Associate at the Institute for Sustainable Resources at the University College London. According to Drummond:

“The report outlines options for government and city authorities to cut NOx emissions from new diesel cars through tax-based measures. The average diesel car currently sold would be charged £1,100 to £1,700 if a NOx-based registration tax is adopted. Options are also detailed for city-based charges, with a focus on London, although the lessons may be applied to other cities heavily affected by air pollution, including Birmingham, Leeds, Southampton, Derby, and Nottingham.”

“Air pollution is a national public health crisis and the government needs to help people move away from dirty diesel vehicles. This report is a welcome contribution to the debate and the government should be looking at how fiscal policies can be used to help clean up the air we breathe.”

“This report shows how our proposal for an air pollution tax on new diesels could be put into practice, creating a set of revenue-neutral incentives to improve air quality. It is important that HM Treasury considers how fiscal policies can be used to address the problem of air pollution.”

The level of the proposed national charge is based on the amount of NOx emitted, and so encourages carmakers to clean up new vehicles. Applied at registration, the charge can be introduced and work alongside the reform of the CO2-based Vehicle Excise Duty in April 2017.

Turning to cities, the report details options for the parallel introduction of NOx-related road pricing, including integration to existing and planned charging schemes. Reform to company car taxation and ‘benefit in kind’ rules for diesel cars are also proposed. Finally, the report outlines how revenue generated may be used.

For further details, the full report, which includes an executive summary, can be found here.

.@DuncanWeldon wrote an article based from our air pollution roundtable on 30 June: https://t.co/WO0eF8Ni2e with James Nix @greenbudget_EU