After global warming caused by black carbon – or soot – from diesel engines is counted, diesel cars do more climate harm than petrol. The finding – contradicting claims by diesel-dominated car-makers – is contained in a briefing for members of the European Parliament by Dr Eckard Helmers [1], Professor of chemical and environmental analysis at Trier University of Applied Sciences.

According to Prof Helmers, diesel’s share of new car sales rose from 15% during the early 1990s in Western Europe to more than half in recent years on the back of reduced taxes and lower air pollution standards for diesel fuel and diesel cars.

Ever-improving petrol engines is one factor leading to diesel cars now being worse for the climate than petrol cars. But it is black carbon that pushes the climate emissions from diesel cars significantly higher.

When black carbon is expressed in terms of CO2, the emissions of pre-2005 diesel cars, few of which have particulate filters, are 25 – 50% (40 – 80g) higher per kilometre than suggested by official estimates dating to the time the cars were sold. While almost all post-2005 diesel cars are fitted with devices to cut particulates, testing undertaken in France indicates that these devices are not working correctly on 75% of cars.

With diesel cars outselling petrol in Europe every year over the last decade, the continent’s refineries are now under strain, and grappling with a growing diesel / petrol imbalance. The tripling of diesel demand since the mid-1990s has led to increased diesel importation from Russia, adding security-of-supply concerns to the higher emissions of a longer supply chain.

By taking a different technological path, and progressing hybrids instead of diesel since the early 1990s, Japan now commands a substantial climate lead over Europe in producing low-CO2 cars for the mass market. In fact, Japan’s CO2 emissions from new cars are 16% lower, with Japan overtaking Europe in 2013, Prof Helmers highlighted. CO2 emissions from a new car in Europe average 20g per kilometre higher, or 128g, as compared to 108g in Japan.

“A continued pro-diesel bias in Europe, either through reduced taxes, weaker air pollution standards, or both, would be a strategic mistake risking the long-term competitiveness of European car-making,” according to Green Budget Europe.

Calling for a renewed focus on tax reform, Green Budget Europe said that the next move is Germany’s. France has already stepped up; in 2015 France taxed diesel 17.3 cents less than petrol but is narrowing that gap to 13.7 cents in 2016. The longer Germany waits before reducing its 18 cent tax gap between diesel and petrol, the harder it will become for its car-makers to become more competitive in making mass market hybrids and electric vehicles, according to GBE.

Download the briefings presented by Prof Helmers and Green Budget Europe at the event “What future for diesel cars?” in the European Parliament. 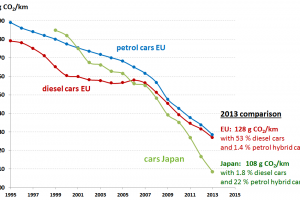 Please click on graph for higher resolution version
Data sources: Cames & Helmers, 2013, EEA 2014, JAMA 2015. EU data is based on NEDC testing while Japanese data is from its JC08 test. However, real-world CO2 emissions in the EU are 40% higher than its tests show, a gap that continues to grow.

Deirdre Clune, the host of the briefing, is an MEP for the European People’s Party for the constituency of Ireland South.

The panel members for the morning briefing in the European Parliament are Prof Eckard Helmers (see above), Greg Archer of Transport & Environment and Paul Greening of ACEA, the European Automobile Manufacturers’ Association. For clarity, in this press release, Green Budget Europe is speaking for itself; please revert to other panelists for their views.

Green Budget Europe is a European expert platform promoting the shift in taxation away from labour and on to pollution and non-renewables. GBE brings together EU and national government institutions, international organisations, industry associations, the research community and civil society to protect the climate and environment.