Environmental Fiscal Reform within the European Semester: From Challenge to Opportunity 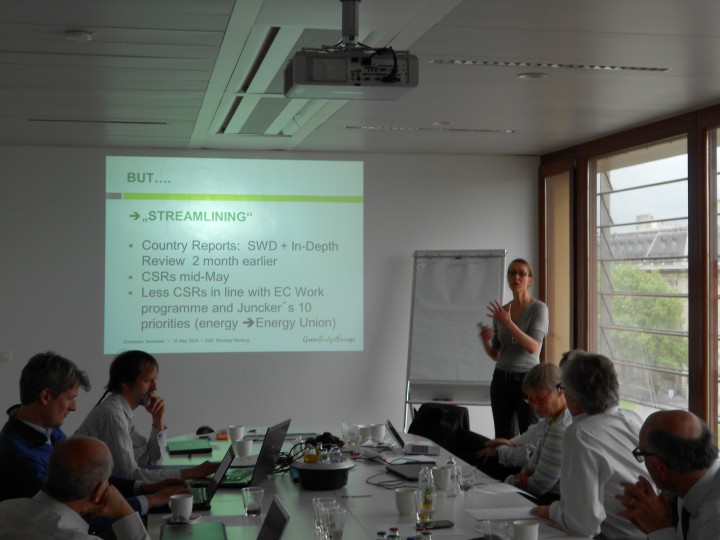 Green Budget Europe’s board members and experts met in Brussels with representatives from the European Commission and civil society organisations to discuss the current state of Environmental Fiscal Reform within the European Semester.

Below are some background information, along with the objectives of the meeting and target audience.

On 28 November 2014, the new European Commission kicked off the 5th round of the European Semester process, presenting the Annual Growth Survey (AGS). The objective of the survey is to set out an economic and social policy agenda focusing on boosting investment, a renewed commitment to structural reforms and the pursuit of fiscal responsibility.

The spirit of the Annual Growth Survey is a further proof to the new Commission trying to roll back on past progress in making growth in the EU smart, sustainable and inclusive. Therefore, there is an urgent need to make sure that key decision-makers understand that fostering growth, creating jobs and encouraging investment in Europe should include ambitious carbon pricing measures. The overall positive linkage between environmental fiscal reforms, social and sustainable fiscal consolidation, and structural reforms that were recognised in the last Annual Growth Surveys have been overlooked. Therefore, the EU Semester work need more campaign resources to deliver more tangible results.

A practical policy approach is to end with distortions in the EU tax systems and shift the tax burden from labour to environmental degradation and resource consumption – a path that was advocated by the Commission in the past but seems to have been virtually abandoned now. The AGS also does not emphasise the potential of reform of fossil fuel subsidies – even though a recent report commissioned by the European Commission puts the figure of external costs of the EU’s energy mix in 2012 at between 150bn € and 310bn €.

The current European Union (EU) context is unique, given both the high degree of cross-border interdependencies shaped by the EU policy framework, i.e. in terms of economic and climate policies, the depth of the economic and fiscal crisis and the turmoil in sovereign debt markets. While recent economic analysis suggests that the economic situation in most EU Member States is improving, the consequences of the crisis will remain a huge challenge and budgetary consolidation one of the main concerns for national governments.

National policy coordination within the European Semester needs to be shared more effectively, especially in terms of exchanging best practices to influence the process at national and EU level.

Identifying which how EFR policies within the European Semester contributed and will potentially contribute to achieve a sustainable level of public finance with the least possible negative impact on growth and employment is thus critical for policy makers. Therefore, we need more capacity building and stakeholder involvement into the process to allow for a better implementation and to ensure that the austerity agenda will turn into a green economy.