Every year, Green Budget Europe awards the “Environmental Fiscal Reformer of the year” prize to a public figure whose outstanding work has contributed to promote and advance green fiscal reforms across Europe and the world.

The purpose of the award is to recognise those who have exhibited strong leadership internationally and who have distinguished themselves in the fields of business, advocacy, research and technology. 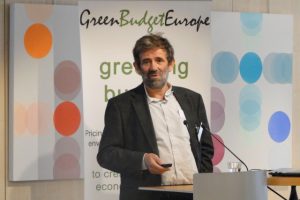 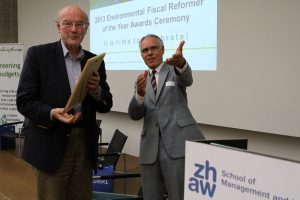 Frank J. Convery is currently manages the Environmental Defense Fund (EDF) Office of Economic & Policy Analysis (OEPA) to drive the adoption of credible price signals to protect the environment and conserve common property resources in ways that are efficient and fair. He is Honorary President of the European Association of Environmental and Resource Economists (EAERE). 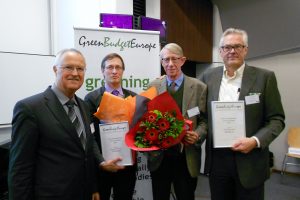 Jean Philippe Barde holds a PhD in Economics at Paris University. In 2006, he retired from the Organisation for Economic Cooperation and Development (OECD, Paris) where he was Head of the Economics Division and of the National Policies Division of the Environment Directorate. He was in charge inter alia of the OECD work on environmental policy instruments, benefits valuation and environmentally harmful subsidies. He has also been teaching at Paris University (Paris 1), lecturer at the “European School of Advanced Environmental Studies” (University of Pavia, Italy) and the “Institute for High Studies in Public Administration” (Lausanne, Switzerland). From 2007 to 2014 he was teaching at the “Paris School of International Affairs” (SciencesPo).

Dominique Bureau has been the President of the Green Economy Committee (Comité pour l´économie verte) since 2015, which was one of the decisive drivers for the CO2 tax in France. 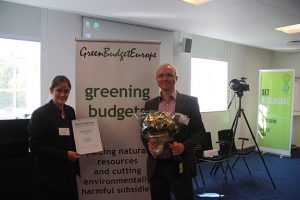 As Deputy Permanent Secretary for Business Affairs, since May 2011, Jens Lundsgaard is responsible for a broad range of policies to promote innovation and economic growth, also in relation to clean-tech. Prior to that, at the OECD in Paris, he worked intensively with environmental tax reform, including the impact on innovation, as well as with macroeconomic and growth policies for the UK, Finland, Sweden and Denmark. He holds a degree in economics from the University of Aarhus and started his career at the Ministry of Finance in Denmark in 1998 before joining the OECD in 2001.